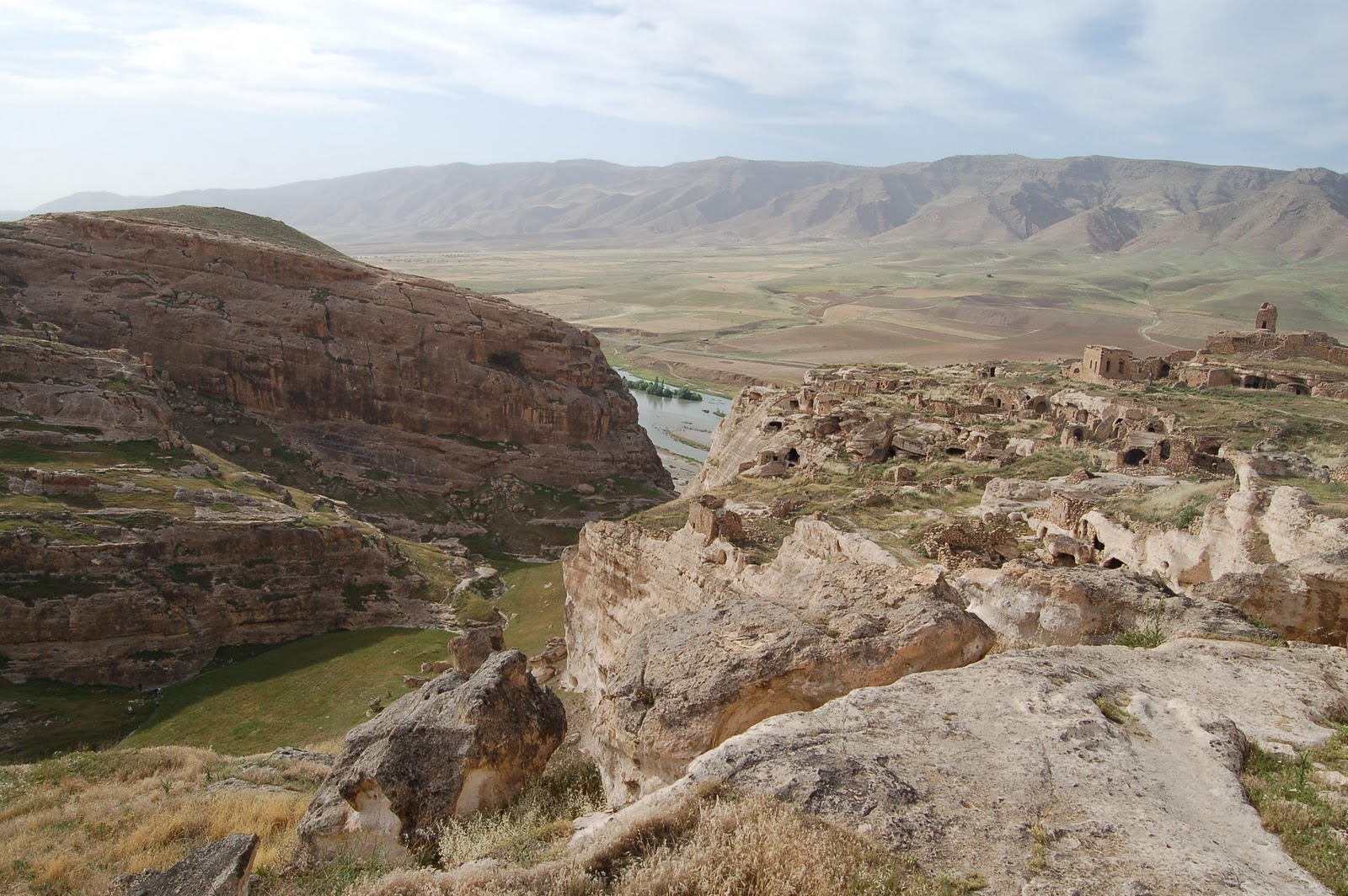 There is only the law.

Several days had passed and Melek was busy making final preparations for the long journey across what is now western Armenia into Anatolia, and finally to the former home of his former being in the far away Aydin province. The journey would take him west to Kars, then slightly south and southwest through Erzurum. There they would travel downstream through the valley of the Fırat Nehri to Erzincan. Then continuing westward, they would cross the low arid mountains and down the Kızılırmak river into Sivas. From Sivas they would travel southwest again to Nevsehir. From Nevsehir they would travel the Uzun Yol southward through Konya and finally to the coastal city of Antalya, where the main caravan would end its journey. Melek and his Nazli would then travel alone to Aydin province.

The journey to Antalya was expected to take at minimum 45 days at approximately 40 km per day, and that was if they did not encounter any significant trouble along the way. There were many packs of roaming bandits throughout the east and along the silk road to the south. Travel could also be made difficult as inclement weather is a possible factor. For the majority of their journey however, September lies at the tail end of the driest season for the regions they would be crossing. While it was a little late in the year, it is not uncommon to make such a long journey during this time. It was somewhat uncommon however, for the caravan to be traveling with a woman, and Melek had noticed some grumbling from a few of the men who thought she would slow them down or otherwise endanger them. Melek was himself a bit apprehensive at bringing her along on such a journey but a nagging voice inside him demanded it. He wasn’t sure why, except to walk once again among the citrus groves with her as she remembered him as another man she once loved.

Most of what the caravan carried is loaded onto camels. There are­ six people in total, each with two camels provided – one for carrying their goods for trade, while the other is loaded with personal affects and occasionally serves as a riding animal. Unleavened bread and some dried salted meats were commonly carried but not in great abundance. Not a lot of food is carried with them as much of their sustenance would be obtained by trading at the caravanserais dotting the roads. The food they left with was primarily intended to stretch them across the barren hills and plains on the first few legs of their trip until they arrived at Erzurum, about six days into their journey. This particular stretch of terrain did not have many outposts for traders. Once they reached Erzurum however, they would join a fairly major trading road and could expect slightly easier travel and accommodation.

A long, old road ahead

The day finally came to leave, and the caravan was loaded as the sun was coming up. Men gathered around the camels down the hill from the monastery, voices chattering. The first day they needed to travel almost twice the normal daily distance in order to reach Kars by the first night. The former post at Ani was destroyed by Timur and his raids, which forced the main trade route to shift southward considerably.

It would be several days travel south to join the main road and there was not much gain in doing so, and making that trip exposed the caravan to early and unnecessary danger. Yet there were not many villages along the first leg of their planned route populous enough to reliably obtain goods and safety through the night. So they left Marmashen and travelled skirting the edge of the ravine where the river flows quietly. Insects were buzzing busily while curlews called. Across the ravine lay the rolling hills and a sea of grasses swaying in the breeze. They travelled south a few kilometers to an old bridge built by the romans which crossed the Akhuryan where they could get the caravan to the other side without having to ford it. Thankfully when Timur blazed across the area they found the bridge useful and left it undestroyed.

Once across the river they set upon the old road which had fallen into disuse as it sliced through the sea of waving golden grasses. There had not been much talking, the travelers all knew it would be a long journey and were saving their best stories for later, when boredom struck them with its dull bludgeon.

Nazli walked alongside Melek, adorned in the same clothing the men wore so as to not draw unwelcome attention to herself should they encounter strangers on the road. It was somewhat dangerous for a woman to be travelling with the caravan in such a manner, and the group insisted she dress in the traditional style of the males. Some of them were more comfortable with her presence than others, and occasionally cast furtive but not unkind glances her way.

Lost in thoughts and memory

She seldom noticed the men looking at her, lost in her thoughts as she was – remembering the trip she made years ago with her father who had dragged her all the way across Anatolia to join relatives in Gyumri. She would subconsciously wince as she recalled the night Hrant had snuck into their home and killed her father. The sight of his face spattered with blood, sitting in that chair as the first rays of sun snuck over the hills and through the window as she was waking. The panic she felt, the rush of emotion still crinkled her face as she relived the memory.

Of her thoughts Melek was unaware, lost in his own goulash of thoughts, he struggled to bring memories into focus. He fought to make sense of his memories, there were so many of them from so many lives. Muddled together in a tangled miasma of despair and confusion. Occasionally Melek would lose himself so deeply in his thoughts that he would lose sight of the ground beneath him and stumble over pits in the road left by the rain and previous travelers. With each stumble he would snap awake again, and Nazli would be looking at him, cracking a tiny grin laced with a touch of empathy. She seemed to care for him, which warmed him inside, and for just a moment her eyes penetrated his mind and he could think of nothing but how beautiful she was. Those were rare moments of peace for him where his jumbled thoughts momentarily ceased their shouting to be heard and there was stillness in his mind.

Arriving at Kars, a shining bead, and a dream

The caravan tromped into Kars as darkness was setting over the countryside. The men were already weary from the long journey and the camels were beginning to complain. The caravanserai at Kars was just outside the edge of the village. Once a bustling busy hub where travelers convened and shared stories of the road, the building stood mostly empty now as most travelers in the region had moved to the southern route. There was one other caravan in the caravanserai that night, a group from Erzurum carrying a load of objects crafted from Oltu stone northward to Tbilsi. One of the men bumped into Melek outside as they were relieving their bladders. A look of fear washed across the man’s face as Melek greeted him. It was as though he recognized him somehow, seeing through his bodily guise, seeing what he truly was for the briefest of moments. The man scurried away back inside the building, but before he left he pulled a small polished bead of the black Oltu stone from his pouch and handed it carefully to Melek without saying a word. Melek looked at the stone lying flat in the palm of his hand. It seemed to glow in the night, it’s polish so refined, it’s coloring so completely black, even a moonless cloudy night such as this seemed envious of its utter blackness. Melek placed the stone inside his satchel and went inside to get some food and wine before falling deeply asleep upon a musty smelling bed in a tiny room adjacent to the camel shed.

That night Melek dreamt he was standing on the shores of a massive lake, amidst a patch of high growing reeds that whispered in the breeze. As he gazed out across the stars reflecting tiny kisses of light on the choppy water, the voice of the reeds in the wind seemed to be trying to form words. He struggled to listen carefully and discern the message in the rustling, but each time it slipped away just as he started to make it out. He turned around to walk away from it and suddenly in front of him was a likeness of Nazli turned to cold stone. Her eyes no longer glowed, her face no longer radiant with color, just the stillness of lifeless stone. Swelling with emotion, he reached out to touch her. He felt a tear slipping down his face as he gently stroked the rough stone surface of her cheek with a sort of disbelief. Very suddenly the whispering of the reeds was in his ear again, but this time loud and clear. It said “There is only the law.”